Okay, okay, I will undeniably fess up to the fact that it’s more than likely true. After years of contemplation since first being told about this by my college academic counselor. I do believe and have to agree that maybe, probably, I could be a late bloomer in life. But honestly, who knew it would be the avocado that would point to my late-blooming propensities? 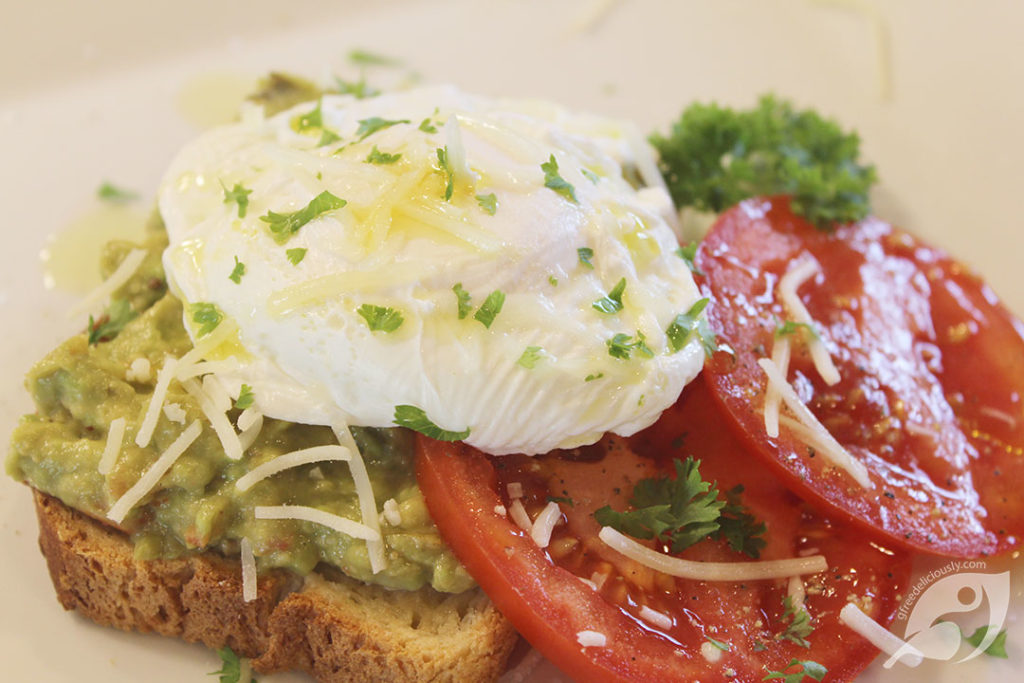 It must have been somewhere about nineteen-years-old when the awareness of the avocado entered my life and a regular part of my diet. I’m pretty sure that I’d eaten them before then, most likely as an ingredient mashed and incorporated into guacamole. And, I remember loving guacamole dip from my earlier Tucson, Arizona days. But honestly, I never really had put two and two together and realized that there was a fruit behind the creamy dip.

Imagine blurring, resonate harp sounds transporting you back in time to 1979…

It was my soon-to-be brother-in-law, who’d come home to the LP of Michigan for a visit, who was responsible for introducing the “alligator pear,” which is descriptive because it tends to be shaped like a pear and has green, bumpy skin… like an alligator.

The eldest brother of my (now) husband had brought fresh Hass avocados from sunny southern California as a treat to share with the family during his visit home.

Can I say he had me with avocado?

OMG!!! I was in love! No, no, not with my soon to be brother-in-law but with this newly discovered creamy yellow-green fleshy fruit!

How many ways can I say that I craved it?

Craving the fruit and affording it was two different monsters. The northern lower peninsula of Michigan, at least in the late 1970’s, was not known for affordable varieties of fruits and vegetables especially during months from September through June.

Avocados became a special treat. When I was lucky enough to have and eat them they garnished salads or were mashed as an ingredient in guacamole and that was pretty much it.

In the early 1980s, my love-affair with avocados renewed when our young family relocated for a year in Long Beach, California where the avocado was plentiful, found at all the grocers, and much easier on our pocketbook!

While we ate the fruit more often during that period of living, the culinary possibilities of avocado eluded my kitchen repertoire.

It wasn’t until years later after coming to central Wisconsin that I came into a full appreciation of avocados, their nutrient value, and their ability to be added to all sorts of dishes due to their great flavor and rich texture.

Here’s a breakfast, brunch or dinner idea, only one of the many of my late blooming ways to use avocado in cooking. It’s a simple, delicious option to make you feel like you’re eating amongst the elite at an upscale restaurant in - well, you name the place.

With their beneficial effects on health and nutrition, the avocado is a positive nutrient booster to include in your family’s diet. Naturally, gluten-free, sodium, sugar, and cholesterol-free, and a great source of dietary fiber that tastes great; I truly will tell you that my love for the avocado has grown deeper and stronger over the years.

The Dietary Guidelines for Americans, 2015-2020 recommends that Americans focus on a variety of nutrient-dense foods and increase their intake of dietary fiber that occurs naturally in foods. Doing this is believed to help in reducing the risk of cardiovascular disease, obesity, and type 2 diabetes.

In a nutshell, nutrient-dense foods are those that provide substantial amounts of vitamins, minerals and other nutrients with relatively few calories. Avocados fit that bill perfectly. According to the California Avocado Commission, just one-third of a medium avocado (50g) has 80 calories and contributes nearly 20 vitamins and minerals.

You can Google, like I’ve done, to read 21,900,000 results about the health benefits of Avocado so I won’t go any further into it here. What I will say is that avocado is most definitely a fruit that will be gracing my recipes for years to come.

So, in this post I’m sharing the recipe for Avocado Toast with Fresh Tomato & Poached Egg, it’s one of the many of my late blooming ways to use avocado in cooking. Serve it for breakfast, brunch or dinner as a simple, delicious option to make you feel like you’re eating amongst the elite at an upscale restaurant in – well, you name the place.

As a final note, what I can assure you is that these days it won’t set you back more than a buck or two in most parts of the country, that and a few minutes of prep time before you can enjoy eating it at your table.

Kymberley @GFreeDeliciously
A healthy meal doesn’t need to be complex or time-consuming. This simple combination of toast topped with mashed avocado that’s seasoned with salsa, fresh sliced tomato, and topped with a poached egg tastes extravagant. With its generous layer of creamy avocado, it’s the perfect breakfast, brunch, or even light dinner that’s big on taste and goodness to fill you up when your stomach is grumbling away.
5 from 1 vote
Gluten FreeHealthy Choices
Print Recipe
Pin Recipe ♥ Save to FavoritesSaved!
Prep Time 20 mins
Total Time 20 mins
Course Breakfast, Entrée
Cuisine American, French
Servings 4 people
Calories 268 kcal

To Poach the Eggs

For the Avocado Spread

To Poach the Eggs

Put it all together...

Copyright © 2017-2020 Kymberley Pekrul | G-Free Deliciously | gfreedeliciously.com | All content, and photographs are copyright protected. The sharing of this recipe is both encouraged and appreciated. Copying and/or pasting full recipes to any social media is strictly prohibited. Please read my Photo Use Policy for detailed guidelines and further clarification. 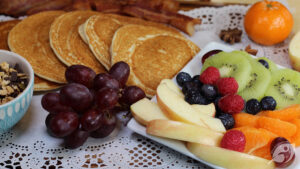 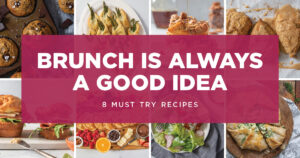 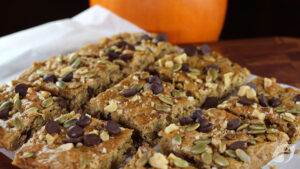 SIGN UP TO GET TASTY, TRIED & TESTED GLUTEN-FREE RECIPES
FROM GfreeDeliciously STRAIGHT TO YOUR INBOX!

We promise not to spam you. Unsubscribe at any time.

Did you fix this recipe? Share your mealtime L♥VE

If you have given it a try, let us know how you like it!

Thanks for stopping by 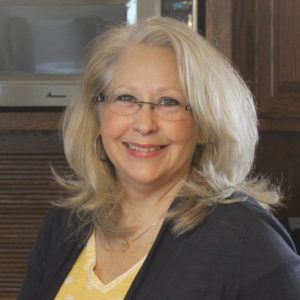 Coach | Cook | Creator | Publisher
I'm so happy you're here,
where my passion is all about cooking healthy, nutritious meals while being gluten-free! Enjoy my easy recipes that focus on using real, whole foods with ingredients you can trust - for gluten-free meals that never, ever compromise on taste, are simple to make, and save you time - even when life gets busy.
Link
dig deeper... 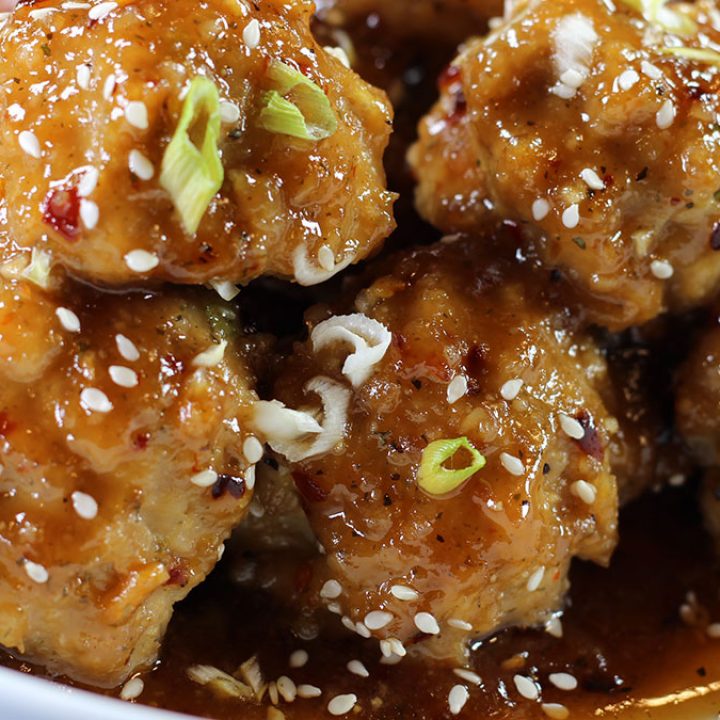 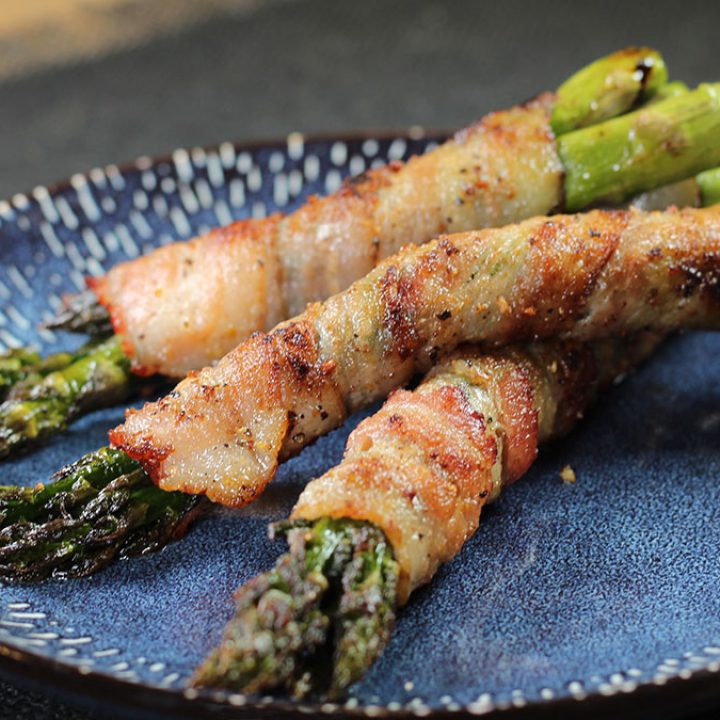 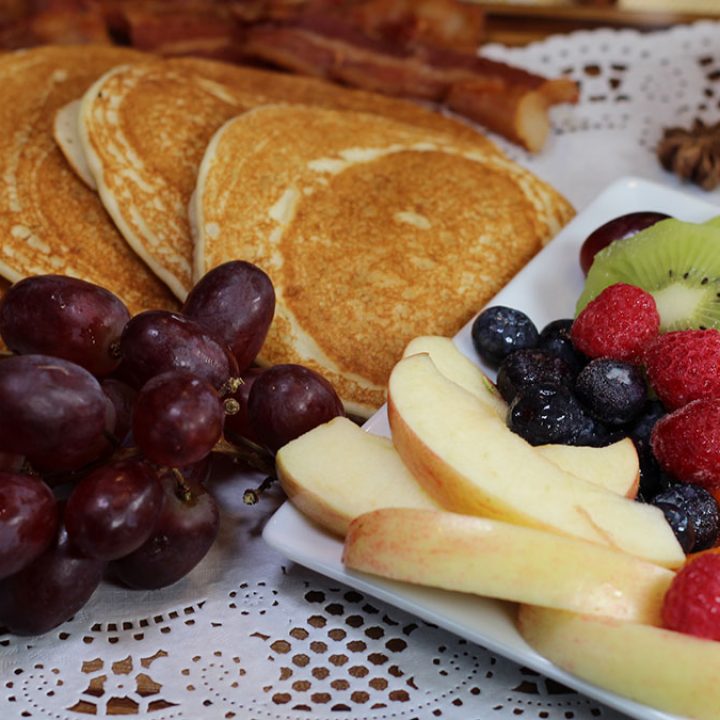 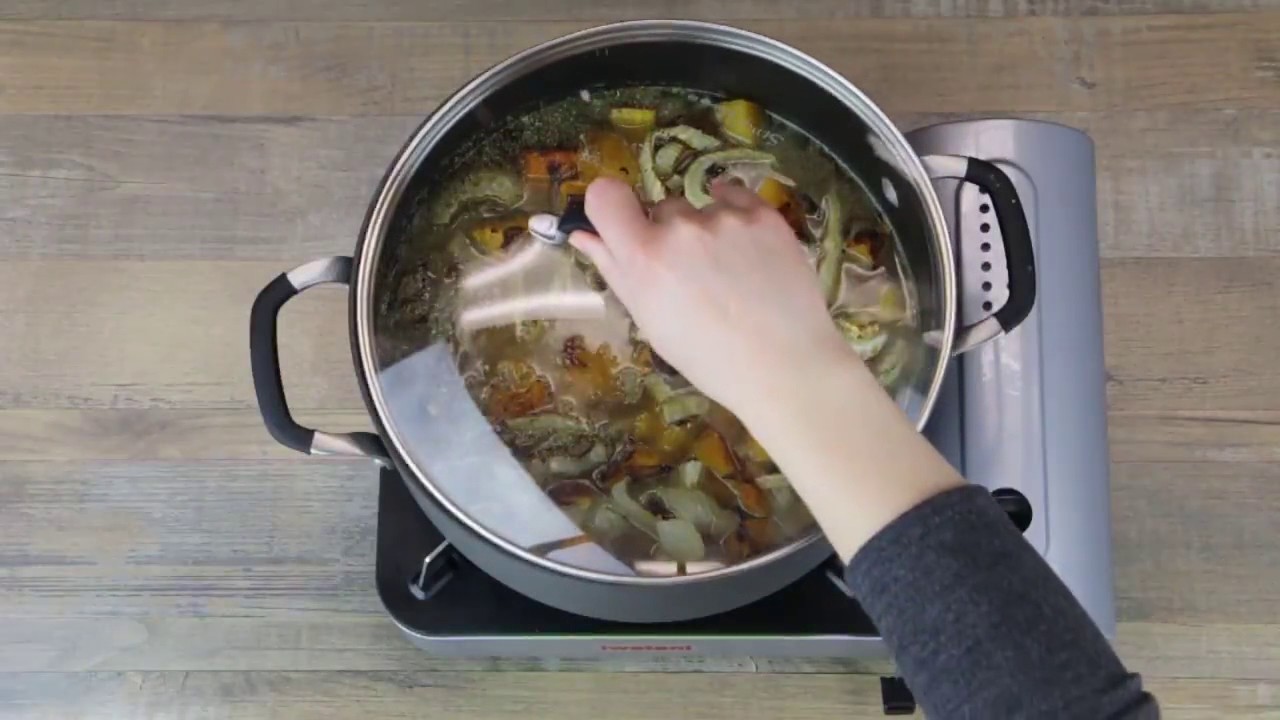 Now Playing:
#CookingWithWildtree
Be sure to visit Wildtree.com/GfreeDeliciously
for everything you need for cooking this and more from Wildtree!

Visit the Wildtree G-Free Deliciously Store to get everything you need to make these delicious recipes.

Check out the exciting changes at Wildtree! 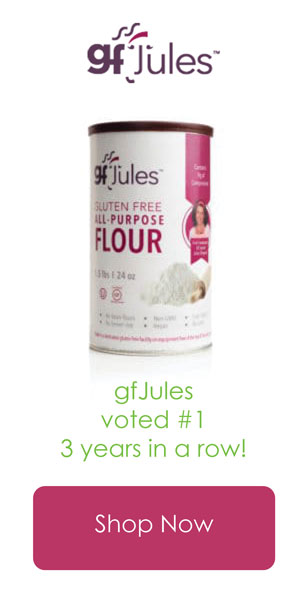 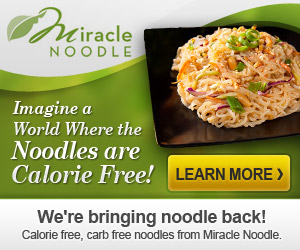 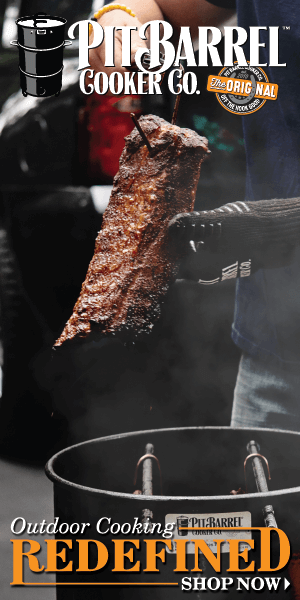 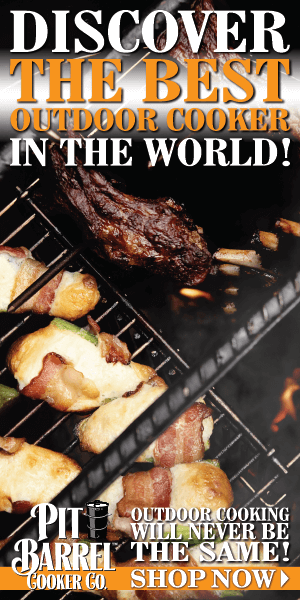 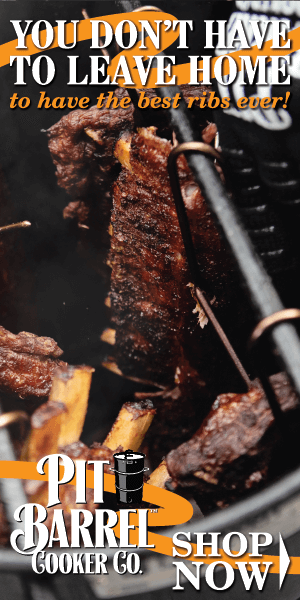 Get the ULTIMATE Guide to
Shopping for CLEAN FOOD & Buying Organic Food in the Market!

GET THE FREE GUIDE
On G-Free Deliciously
continue exploring 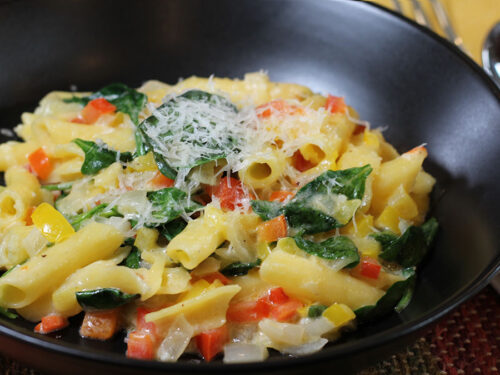 Taking inspiration from Peperonata (an Italian stewed sauce of Sweet Bell Peppers with Olive Oil, Onion, Garlic, and Tomatoes), we’ve skipped the tomatoes and concentrated on summery yellow and red bell peppers for this recipe, then stirred in mascarpone cheese and baby spinach to serve over penne pasta for a budget-friendly vegetarian meal full of saucy comforting flavor! 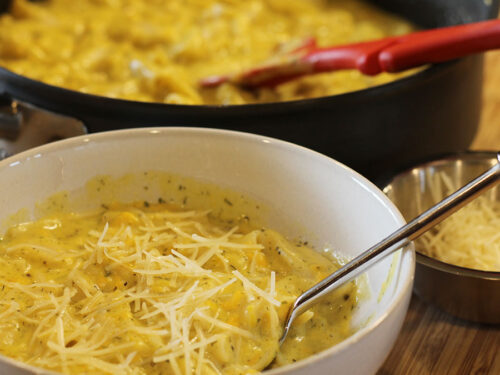 A creamy, healthy homemade Mac & Cheese that kids of all ages will love! Make this better-for-you macaroni and cheese dinner with a burst of Fall flavor using canned pumpkin puree and cheddar cheese for a bubbly good weeknight meal. 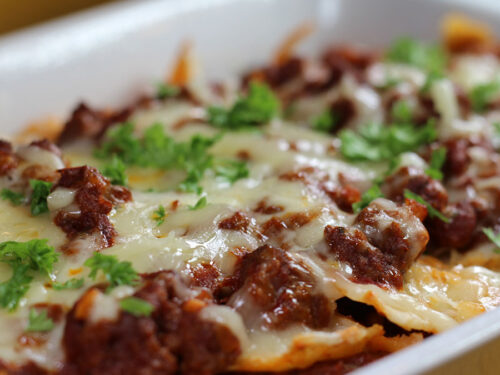 Easy Beef Enchiladas with Homemade Red Sauce is so simple to make! No store-bought red sauce needed for a Mexican entrée that’s ready to serve in just 30 minutes! 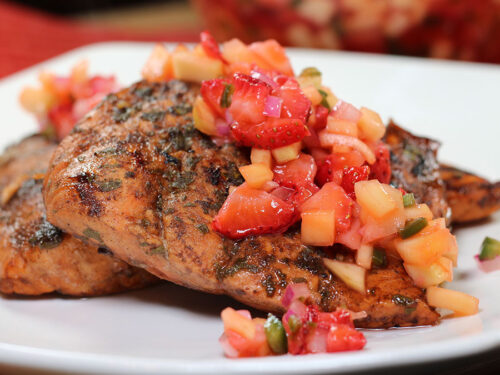 Slightly sweet and smoky Strawberry Balsamic Grill-Glazed Salmon Fillets – This grilled salmon recipe offers bite after bite of summer deliciousness in a healthy and easy dinner that is full of flavor.

BECOME A VIP MEMBER
TO GET YOUR
FREE RECIPE eBOOK

By downloading this eBook you agree to receive occasional emails including recipes and exclusive offers from G-Free Deliciously. You may opt-out at any time. If you would like this eBook without joining our email list, please contact us directly.

NO Need to Look for Your Calculator:

Adjusting the serving size of recipes is easier than you may think.

To change the number of portions that a recipe makes go to the “Servings” quantity in the recipe section below. Hover over the servings amount and a slider box will appear above the amount. Slide the toggle to adjust the desired number of portions you want to make. Please note that when adjusting the serving amount the ingredient measures will change to decimal equivalents. Need help with cooking and recipe conversions? Head over to Good Cooking’s Cooking & Recipe Conversions Guide for their online collection of helpful links!